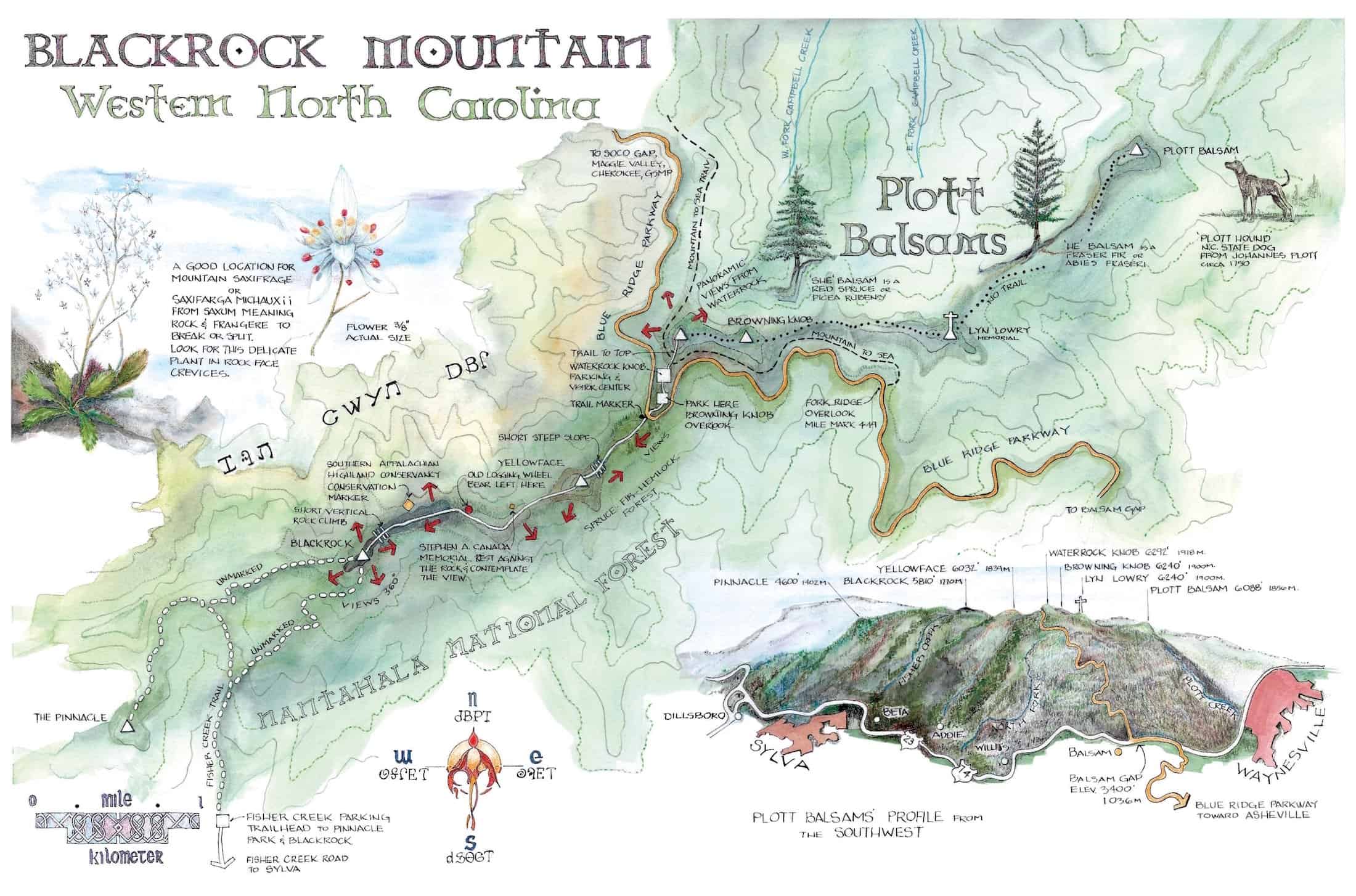 The Mountains here at Blackrock Mountain are far older than mankind. Sands from the erosion of their once-tremendous heights can be identified on the Atlantic and Gulf of Mexico coastlines. In the past, these mountains had numerous names. Travelled by many, over thousands of years, even before the Cherokee tribe claimed this as their home over one thousand years ago, hunters came to the Blue Ridge Mountains in search of game. Their history was never recorded in any language we understand, although some of it remains carved into rocks found in our coves and valleys like the Judacalla Rock. Based on the recorded data, this most likely occurred around the time of the building of New Grange in Ireland, later Stonehenge in Great Britain and the Pyramids of Egypt. Similar explorations and settlement by the Cherokee Nation, over several centuries, eventually led to our brief American history in these mountains which can be traced back to the period just prior to the Revolutionary War.

The Plott Balsams were named for one of the early settlement families who moved here after the Revolutionary War, just prior to the 1790s. This is around the time period just after the Cherokee Nation lost much of its land holdings to the new American nation due to their involvement with the British during the war. The hounds that Henry Plott, son of Johannes Plott, brought to Western North Carolina were thoroughbred dogs of German descent used for boar hunting in Europe. The Plott family named them, protected their pure lineage and introduced them to the area where they were used to hunt large game. The Plott hound has been recognized as its own breed nationally/internationally and is the State dog of North Carolina.

We do not recommend this trail to casual hikers and those with very little knowledge of wilderness hiking.

From Waynesville, take US 23/US 74 southeast for 5.3 miles and exit right onto the Blue Ridge Parkway. Head northwest (another right). In 8.2 miles, at marker 451.2, turn right on the road to Waterrock Knob. Trailhead parking is located at the Browning Knob Overlook.

This is a high elevation hike, so when the temperature drops below freezing, the Parkway is likely to be gated. Check for a real time road closure map at: www.nps.gov/blri

To Blackrock Mountain, it is a 4.6 mile round trip from the parking area at the Browning Knob Overlook. Allow at least 4-5 hours. This part of the walk will take you through at least 550 feet of elevation changes in each direction (total of 1100 feet). It can be classified as moderate to severe in spots. Watch your step!

Also, you can continue a challenging walk to Pinnacle Park. Once again, refer to the map. It extends the trail to 5.4 miles for a round trip of 10.8 miles. Be prepared for a more challenging hike. The trail is rated expert and is not marked.

It is recommended to park your vehicle at the Browning Knob Overlook rather than at the busy intersection leading to Waterrock Knob at the Blue Ridge Parkway entrance. On foot, from the parking area, you can decide to hike up Waterrock Knob to take in the views of the Plott Balsam Ridge and beyond. Otherwise, start by walking the roadway downhill to the trailhead on the west side of the Blue Ridge Parkway intersection.

You begin this walk with a short uphill through a Spruce Fir Forest. In .2 miles, you will get your first view of Yellowface Mountain. In a few minutes, you will begin a short ascent of Yellowface. There is a steep rock slope but it is not long. The slope can be slippery when wet, so watch your step. In a short while, you will come to an open meadow. If you look back from here, you can see Waterrock Knob, Browning Knob and Lyn Lowry. When you get to the next meadow, your view can easily extend eastward out into the Nantahala National Forest and the Snowbird Mountains. You are now at the ridge of Yellowface Mountain.

After a brief descent off Yellowface, you will do a short uphill past a large rock face. Look carefully to your right and you will see a stairway leading to a grassy patch with a small cast bronze memorial to Stephen Andrew Canada. The elevation here is 5666 feet. This is a wonderful place to stop, sit and lean back against the rock to take in the view. The panorama of the Greater Balsams from here is stunning all the way out to Cashiers.

As you head downhill through a continuation of the Spruce Fir forest, you will come to a small clearing used periodically by campers. There is a heavy rusted wheel left from the logging days sitting on the ground. At this location, you will bear left through the pine forest, were you begin another ascent. During this climb, the trail changes from ground into rock. The remaining part of your trip to Blackrock Mountain is on this rock ridge. It is absolutely stunning and narrow. The rock formations here are impressive. The trail is not always obvious and people often wander off, only to find that they dead ended. Watch for those Purple and Gold Blazes indicating the trail. Your views here are both north and south from the ridge. There are times in the year when you can see the Smoky Mountains to your right.

Proceeding toward Blackrock, you will begin to get clear views of Sylva and will also see the dominant Blackrock summit in front of you. Continue along this rock ridge, and in a short while, on the right, you will see a yellow tag on a tree indicating that you are on Southern Appalachians Highland Conservancy protected property. You are nearly to the next vertical ascent. The ground will be covered with Galax and moss. Look for a red surveyor’s tape tied to a branch at the vertical rock directly in front of you. This is a short climb for about 12′ up to continue on the ridge to Blackrock. In less than a quarter mile, you will come upon the summit. One more short vertical 4′ to 5′ and you are at your destination. Sit on Blackrock (it is really a black lichen-covered stone). Take in the panoramic 360° views and a snack, before you head back.