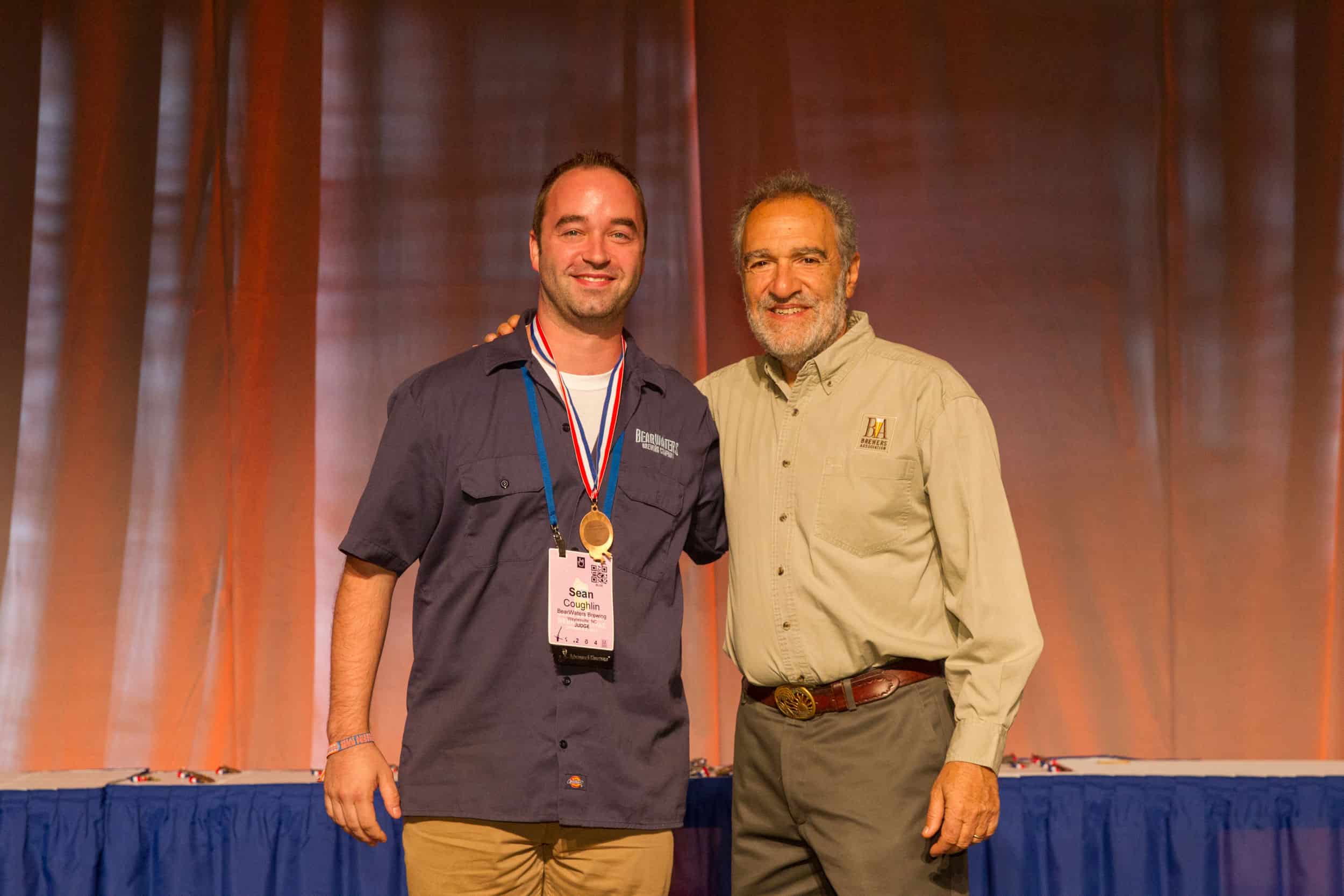 “When Sean walked across that stage and accepted our award, it was for everyone that continued to believe in us. For our new community that has so warmly welcomed us. It was validation of the spirit of all that are BearWaters. This is the journey that has shaped us into a world class brewery! Soon we will celebrate together!”

Canton, NC is in the very midst of a revolutionary revival. With new businesses opening every month and the creative, hard working vibe drawing in young entrepreneurs, adventurers, and families, it’s clear to see why BearWaters Brewing Co. choose this mountain town as it’s home base in 2017. Only 4 months into calling Canton home and they are already making waves in the highly competitive brewing industry. 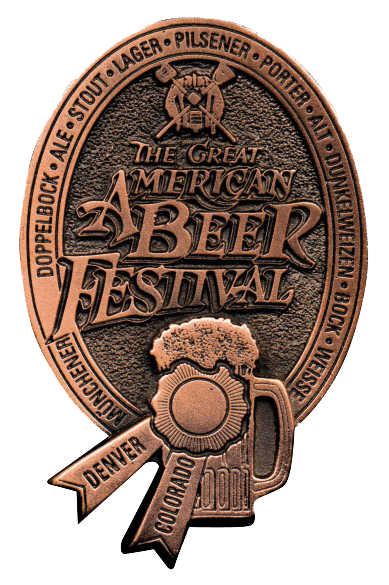 The Great American Beer Festival presented by the Brewers Association, is the largest commercial beer competition in the world and recognizes the most outstanding beers produced in the United States. The top three winners in the competition’s 98 beer-style categories were announced October 7 at the Great American Beer Festival awards ceremony held at the Colorado Convention Center in Denver, Colorado. 2017 GABF competition winners were selected by an international panel of 276 expert judges from 7,923 total entries.

BearWaters submitted their “Smells Like Money” brew in the Belgian-Style Strong Specialty Ale beer-style category. This beer style is one of the oldest consistent beer styles still produced today. Originating from Belgium and brewed by Trappist monasteries and abbeys, this style of brewing is still made in Belgium by monks and breweries alike. Smells Like Money has a robust grain bill and high sugar content because this Belgian-style ale was used as a food substitute by Catholic Monks in the 16th century during Lent. 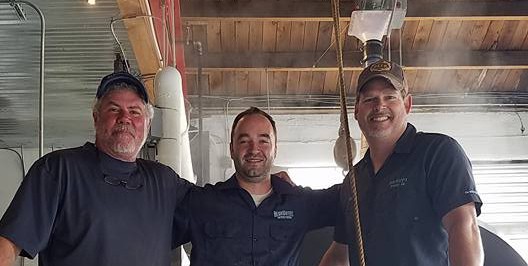 If you’re wondering when you can get a taste of this award winning beer, brewer Justin Tate says “I’m actually brewing another round of the ‘Smells Like Money’ this very moment. So we will have to wait on the yeast to do their thing.” Fear not, their Canton brewhouse still has 12 delicious beers + 1 guest cider on tap to hold you over. For those who don’t drink they also have their own house made sparkling waters.

What’s in a Name?

One may wonder where the name “Smells Like Money” comes from but one trip to Canton, NC and your question would be answered. Located in the heart of downtown, Evergreen Packaging paper mill produces Starbucks cups and other popular paper products used around the world. Formerly Blue Ridge Paper and originally Champion Fibre Company paper mill, which persevered through a great depression, two world wars, and two buy outs, this mill now employs 1,200 workers and boasts 600 union jobs. Sometimes you can catch a whiff of the mill which locals have said “smells like money,” alluding to the fact that the hard work of locals, business owners, and overall grit and determination of Canton has kept the town thriving. 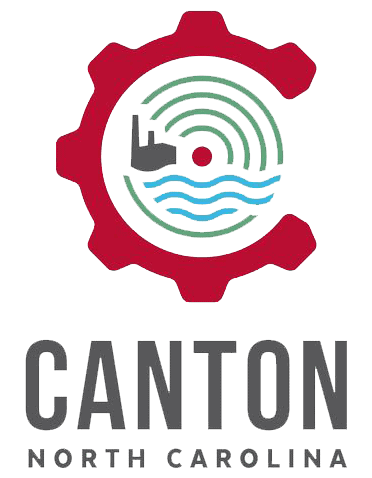 Canton was incorporated in 1891 and sits at an elevation of 2,609 feet among the Appalachian mountains on the Pigeon River. The paper mill was and is a cornerstone to Canton’s economy and proof that the people of Canton work hard and take pride in their town. The town of Canton has embraced this and even incorporated the mill into their logo. When you visit, you will find that the people who live there are full of a spirit of generosity, creativity, hardworking nature & compassion. Businesses help each other out and pride swells for Canton’s growth and growing popularity among entrepreneurs. BearWaters is a prime example of Canton’s work ethic. They pride themselves on using varying local ingredients like the muscadine grapes for the muscadine saison. They are even hosting a Mountain Life Fall Festival (details below) which celebrates all the natural resources of Haywood County, using all the proceeds to purchase food for their community dinner to feed Haywood County residents in need.

Many businesses have seen the potential for growth in Canton while property is still affordable and Canton is on the cusp of booming. Southern Porch owners Nathan and Michaela Lowe, Cindi Layman, and Dave Grant saw the potential when they acquired the Imperial Hotel building about a year and a half ago and opened the highly successful South Porch restaurant in downtown Canton. Verbena Soap Company and Our Daily Bread Bakery are also among the newer businesses to join Canton’s downtown business district.

“BearWaters Brewing Co receiving a bronze medal is not just a win for our local brewery, but Canton. As Asheville continues to grow, Canton is now a bedroom community that provides great opportunities for entrepreneurs, real estate development, and outdoor enthusiasts.  However, as we grow, it is important that we don’t lose our identity and blue-collar. What BearWaters has been able to accomplish, along with other businesses, is that it is possible to now do both. The “Canton Comeback” exists because people are believing and investing in our passion that a milltown can not only survive in the 21st century, but thrive.  All us in Canton would love to have you living in our homes, attending our great schools, eating in our new restaurants, and now drinking our award-winning beer.”

– Zeb Smathers, Alderman for the Town of Canton

Haywood County is 1 of 2 headwater counties in the entire country (Floyd County, VA being the other) meaning no water flows into Haywood County. Water is arguably the most important ingredient in beer considering beer is typically comprised of 90 to 95 percent water. Less pure water runs the potential of introducing trace minerals or other elements that could react to beers causing a less than tasty outcome. The water coming from Haywood County is the cleanest, freshest water you can get, making it ideal for breweries and distilleries locations. Canton is home to the Pigeon River which begins in southeastern Haywood County and gives name to the Pigeon River Grille located inside Bearwaters.

Canton boasts top school districts and has attracted families for their excellent education programs as well as plenty of kid friendly spaces. The Canton Recreation Park sits on the Pigeon river and has an outdoor pool, picnic area, water slide, playground and more. There are several access points to the river and Haywood Waterways Association has hosted a Kids in the Creek event for over 20 years, an educational day of fun teaching kids about the importance of watersheds, water critters, and all things water.

Just a 20 minute drive from Asheville, Waynesville, Maggie Valley and Lake Junalusaka Canton is a prime central spot for residents and businesses alike.

Now that you have beer on the brain, head to BearWaters this Saturday October 14, 2017  to celebrating the Natural Resources of Haywood County. 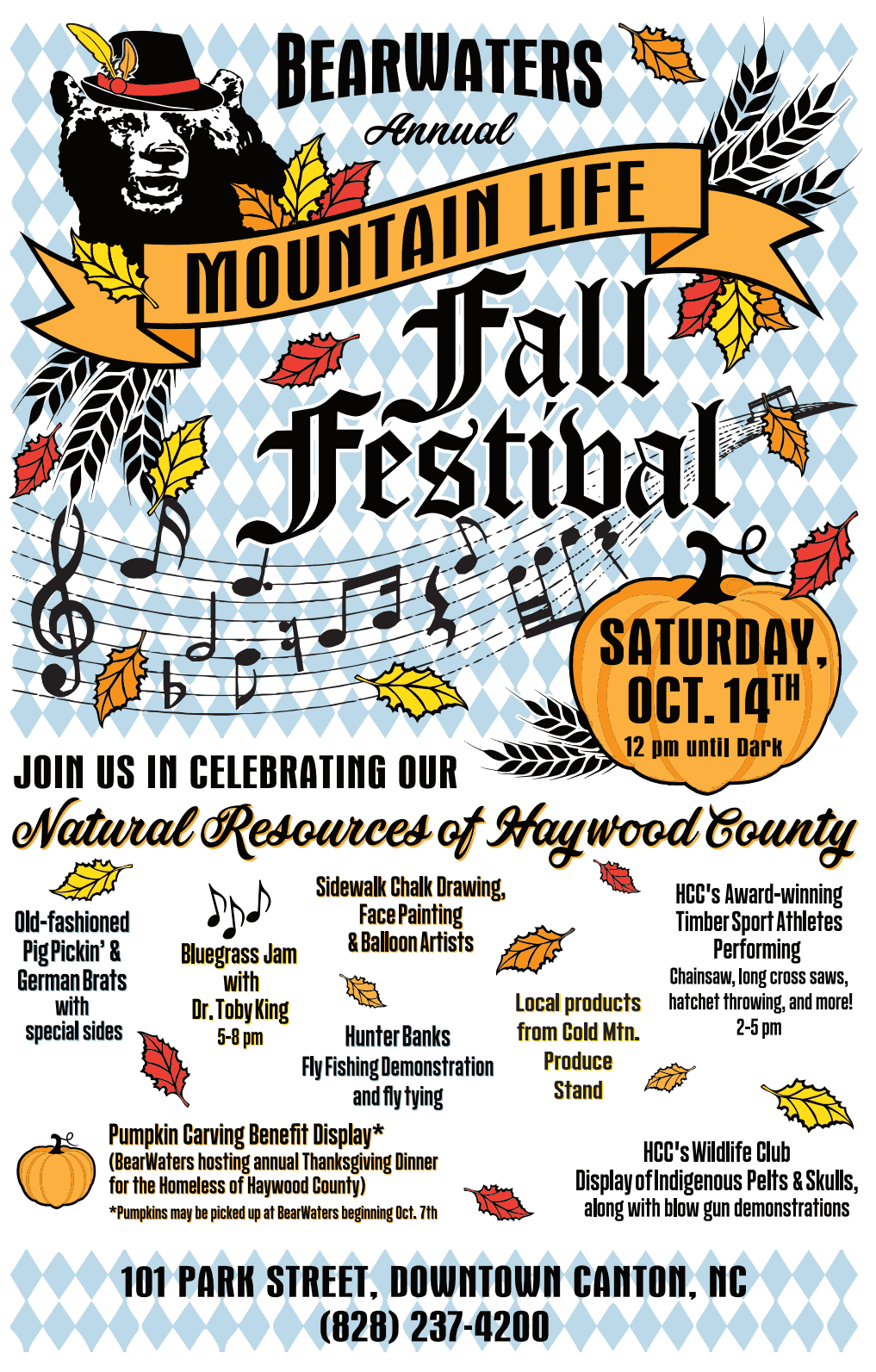 Where to Find the Best Coffee in Waynesville

Whether you need a little pep in your step each morning or an afternoon pick-me-up, there’s something about a cup of coffee that lifts
DETAILS
DETAILS