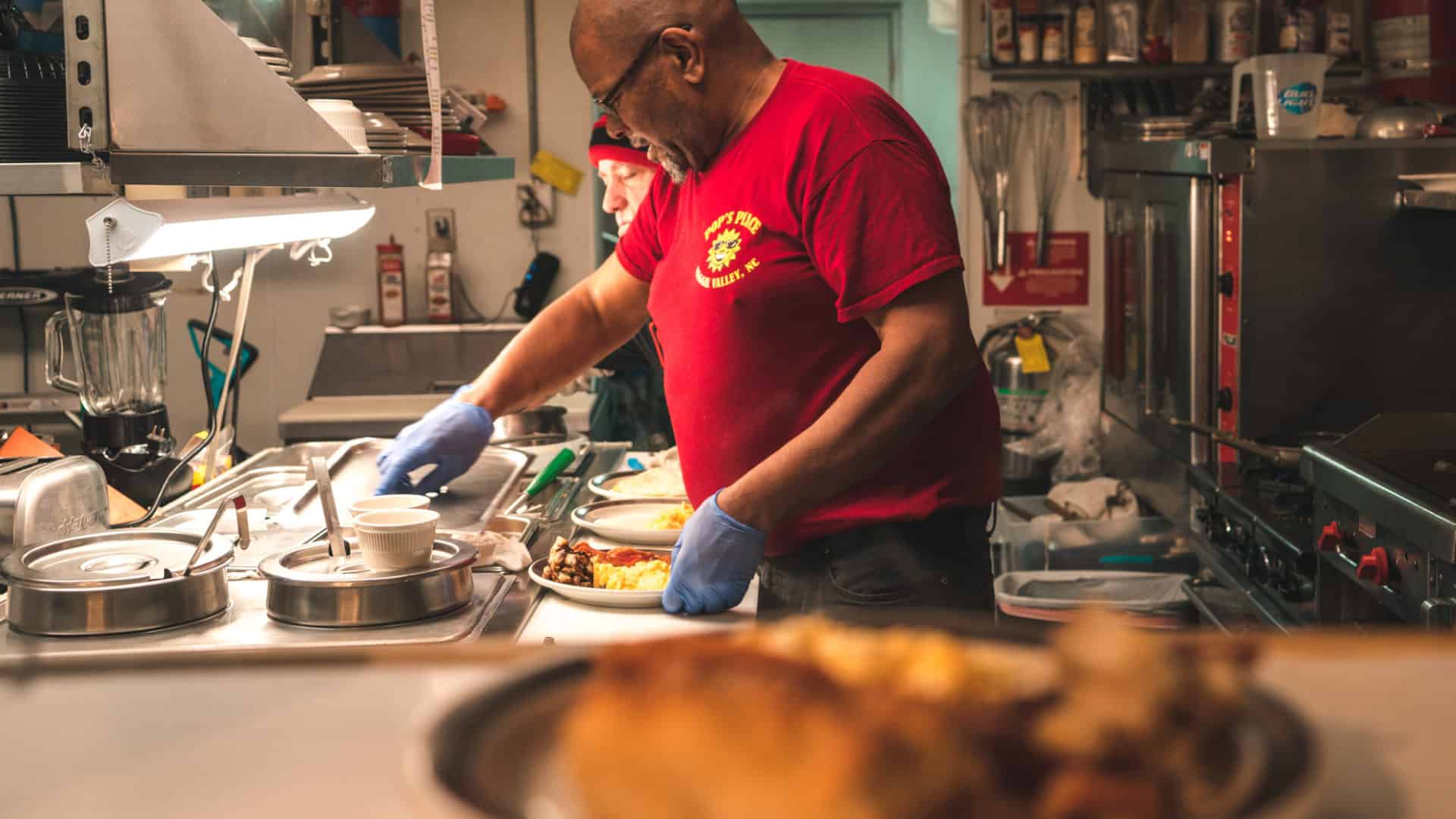 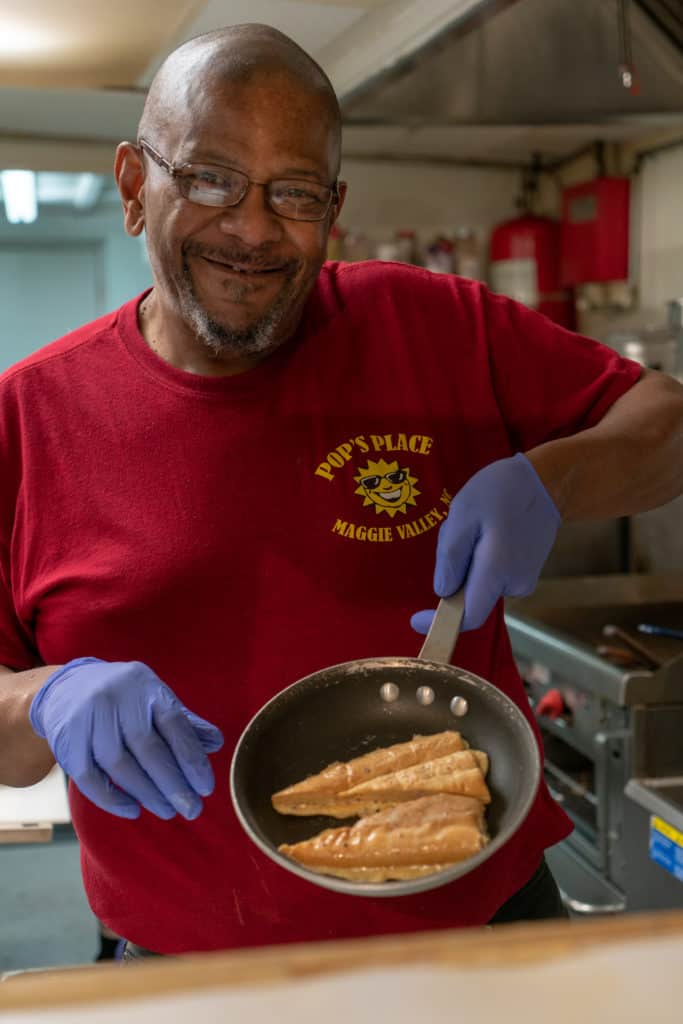 In honor of Black History Month and celebrating local community members who contribute greatly to Haywood County, I sat down with Valgene “Val” Hamilton, owner of Pop’s Place in Maggie Valley. This morning as I sipped my coffee and listened to Val, I was aware of how friendly the customers who came and went were with Val, making sure to say hello and offer smiles. I myself met Val (who I had assumed was named “Pop”) a few years ago before I moved to the area after a long night of backpacking and in much need of warm food. My first memory of him is one of him singing rather off tune in the kitchen and laughing with my friend at his jovial morning spirit.

Val, you can call him Pop too, has been working at, and now owner of, Pop’s Place for 4 years now. Pop’s Place is a small 40 seat restaurant in Maggie Vally. At 65 he still works hard in the kitchen 6 days a week and has an easy going personality that instantly makes you feel like family. Val’s parents owned a diner in New Jersey and he was the 11th of 15 kids. He’s been in the restaurant business his whole life and his passion was food ever since he can remember.

What is your favorite breakfast item?
I’m classic, I like pancakes, eggs, meat. Our best seller is our shrimp and grits. I use a fried grit instead of soft grits. I’ve had people tell me that “yours is the bomb, the best ever from anywhere I’ve been” so I would say that’s a good compliment. Our Loaded Biscuit and Country Boy Benedict are also ordered a lot and we make our biscuits from scratch of course.

When did you move to North Carolina?
Well from New York I first moved to Florida, so I’m a half backer, but then in 1986 I moved up to North Carolina to help a buddy of mine run a restaurant in Brevard. I was ready to get out of Florida anyways. My buddy Mario lasted 6 months but I’ve been in North Carolina ever since.

How did Pop’s Place come about?
After Brevard I worked around at a couple different spots in Cashiers, Sylva, and Cherokee and then I took a 4 year break while I was on disability. My son is actually the one who found this spot and he came to me and said “Dad come look at this restaurant with me” and I said “Aghh” (waving his hands away) but I did it and we got some funds together and opened up and here I am. I work 6 days a week, 7 because even on my off days I’m banking, groceries repairs, whatever. I took over about two years ago and renamed it from Pop’s Grits & Eggs to Pop’s Place.

What do you think when you hear “Black History Month?”
What I would like to hear is “history” I don’t think we should have a white history or a black history, we should have history but it should be taught in truth. The one thing I do like about it is there’s so much history coming out now, and truth coming out now. We’re finding out who actually invented things verse who was the face of those things, or who we assumed invented them. One of the problems with history is that we divide instead of joining, and people that would like to see us apart really focus on black history or black this and that – I want to see history as a whole. 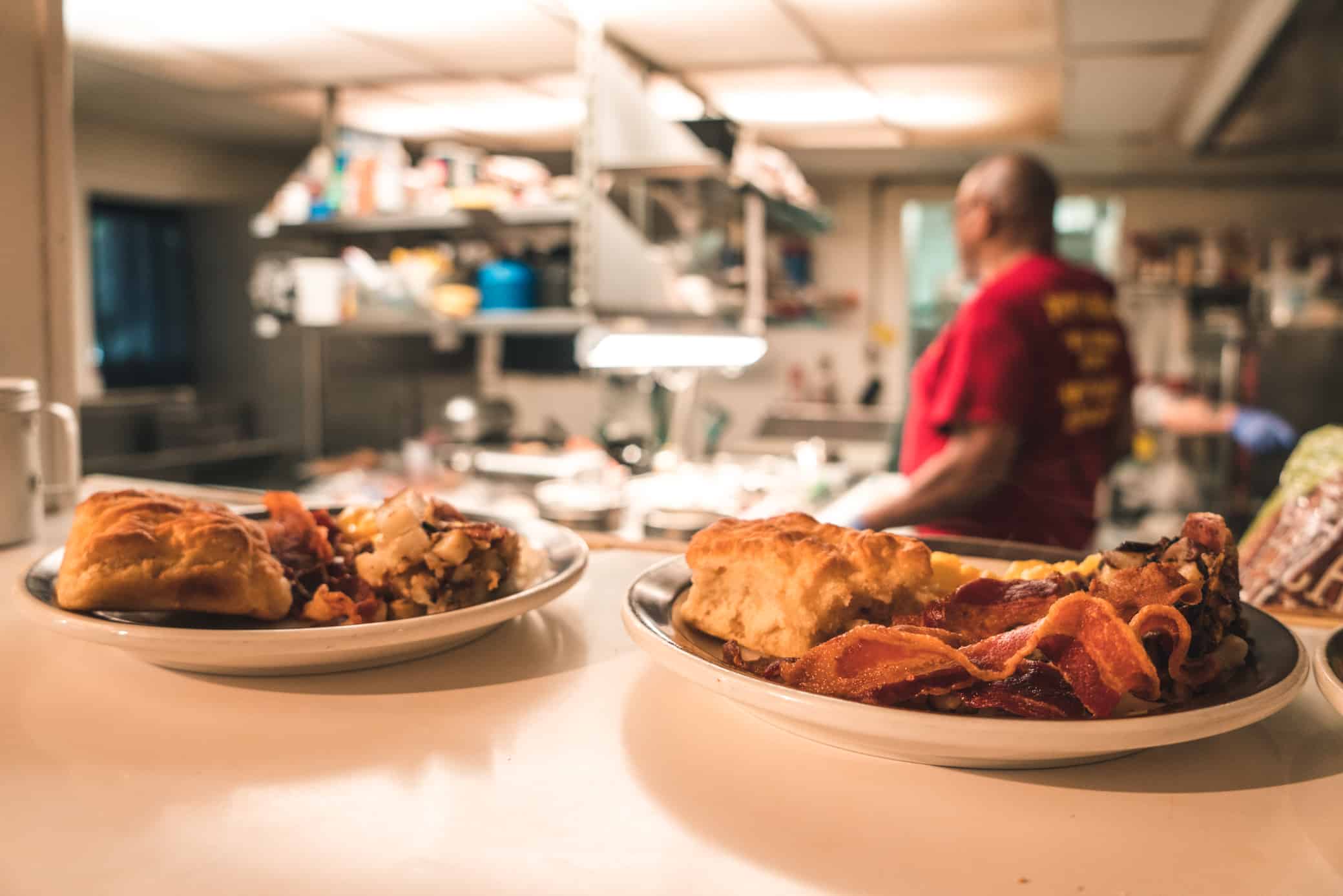 What do you enjoy about the community of Haywood County?
The business owners are very helpful to one another. Wheels Through Time – I’ve done a lot of catering for them, Dale has sent people my way. I see Theresa from the Chamber coming by here for a sandwich, in fact, last Saturday I saw her busing tables because she saw we were busy. Maggie Valley makes people feel comfortable, I always try to make this place comfortable and welcoming. I sing, I have a terrible voice, but people love it when I sing so I sing and make people happy, we want to help people be a little happier.

What would you like to inspire or leave as a legacy?
I’m more inspired by local people that I know than so called famous people. I speak out all the time against racism. I love all people, love culture. I don’t dislike you because you’re a muslim, or jew, or whatever. We’re all humans. We come from the earth and we all end up right back in it. The richest guy in the world and the poorest guy on the street both end up in the ground. If we could all learn to live together before we go into the ground we can make a difference. I have customers and friends that I disagree with politically but we’re able to talk and continue our friendship while listening to each other. I’m trying to change them and they’re trying to change me, whether it works or not, I don’t know. When I die I want people to say “he tried to make a difference, he was a family man, he was a good decent human being.” 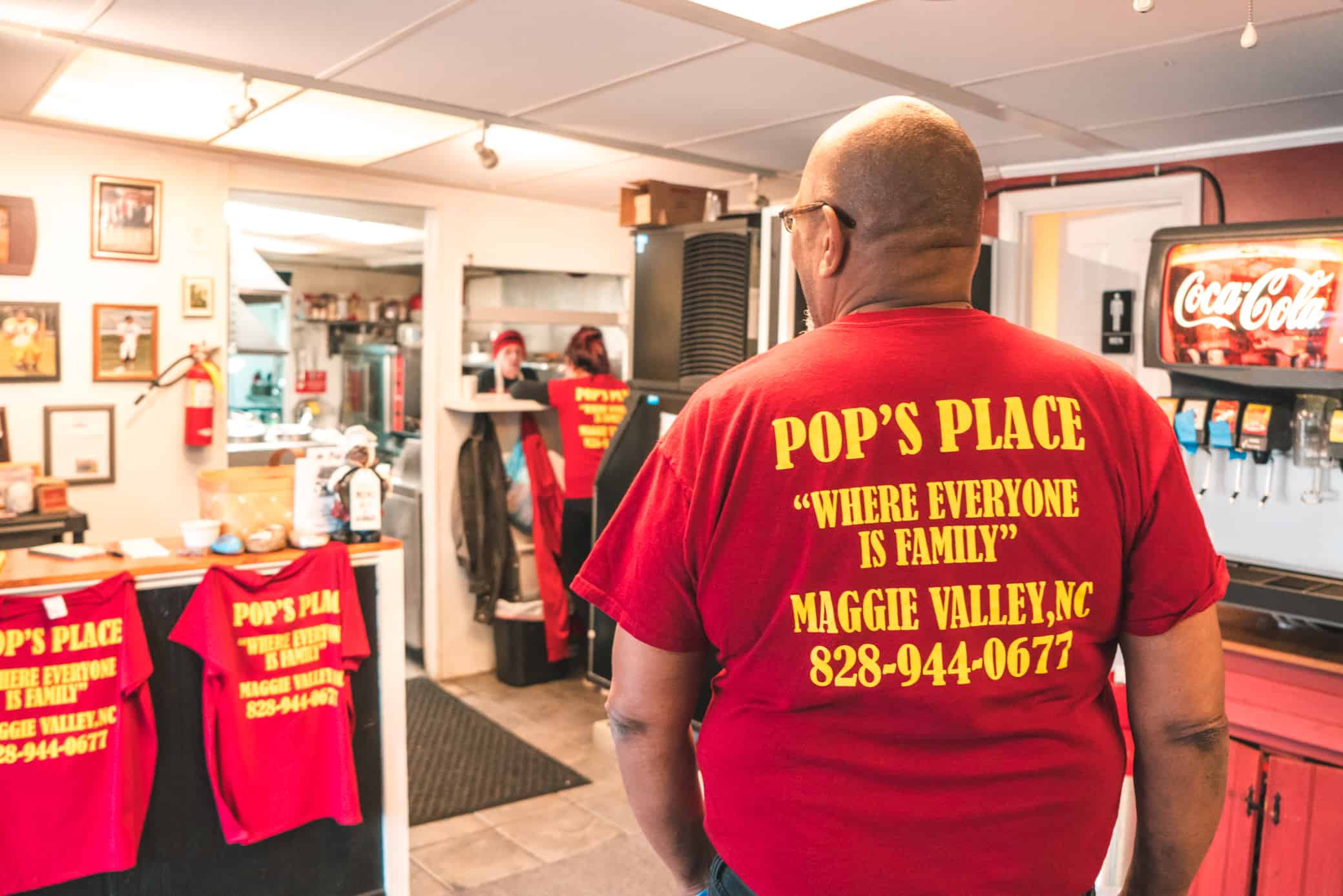 Great piece. Whenever I come home in September I will visit Pop’s Place as well as wheels through time. I’m a motorcycle guy. Love Dale’s place. If Dale speaks for Pops I’m in ! 👍🏿

Love this man’s view on life. Will definitely visit his place the next time I’m in Haywood County.

So glad to see you Valgene ( Dale Scott sister …remember?) congratulations on the business that’s just awesome . Reading the article , you have never changed , same values we all had . Best of luck always .

Congratulations Valgene. Your ideals of life have never changed. Peace my hometown friend.

Make me wanna catch a plane for breakfast!!!

I knew Val when we were kids. He was an awesome friend then and I can see he has not changed a bit. I haven’t seen him in years, but sure glad he is doing great.