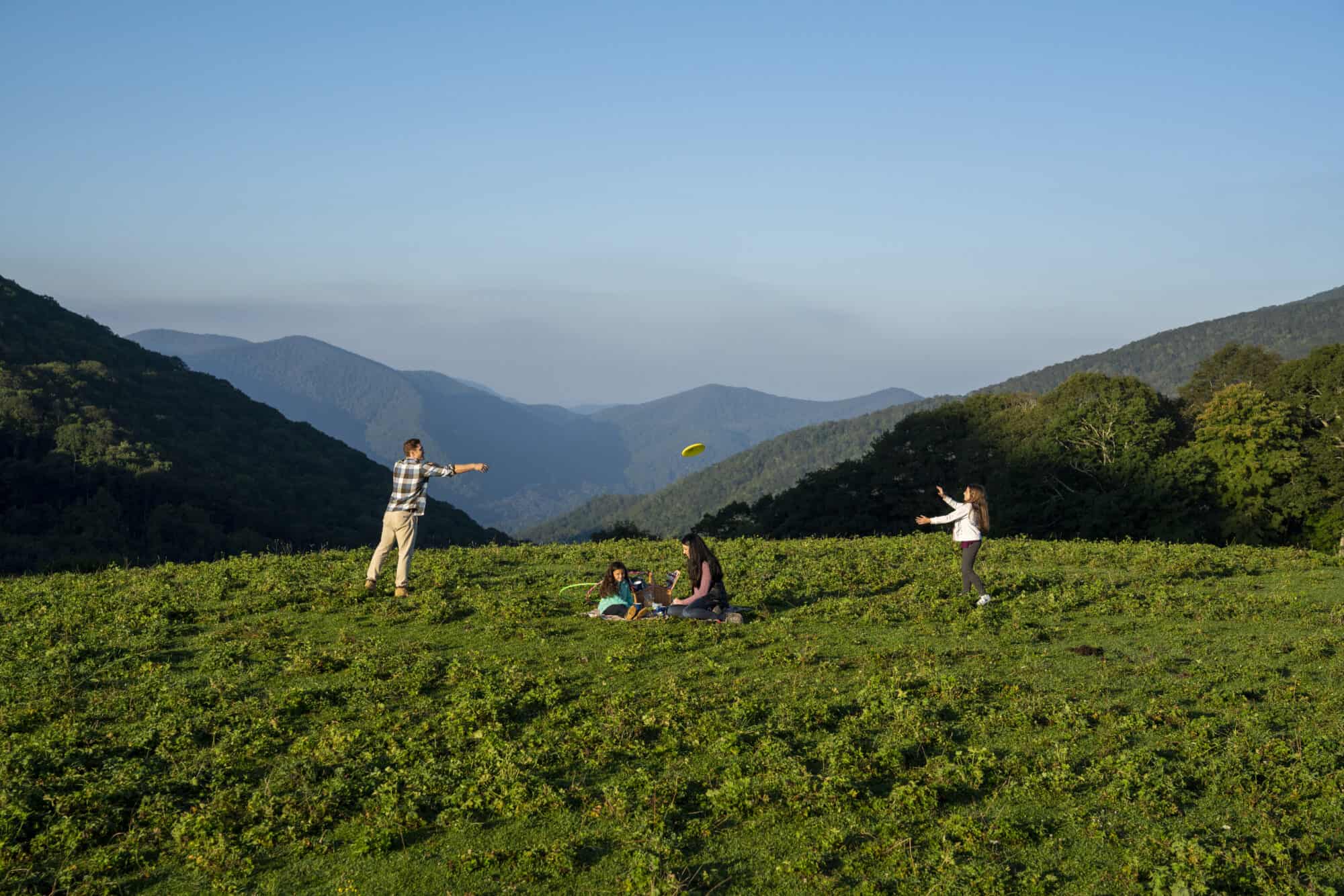 Cataloochee Valley, located in the heart of the North Carolina section of the Great Smoky Mountains National Park, is one the most visited attractions in Haywood County.  This section of the national park is full of beauty, history, and wildlife which includes the majestic elk who were reintroduced into the valley in 2001.  While this serene area of the park has long been a recreational favorite of visitors and locals alike for fishing, hiking, camping and exploring, there is also a rich history behind the valley that tells how it evolved into what it is today.

Cataloochee consists of three narrow valleys running parallel to one another and are surrounded on the sides by the high ridges of the Smokies. The name “Cataloochee” is derived from the Cherokee phrase meaning “wave upon wave of mountains”.  The Cherokee first discovered the valley when they came through the NC Smokies to hunt and fish, but they did not permanently settle here.  It was the Europeans who settled here when they arrived in the valley in the early 1800s.  At that time, all of the land belonged to Colonel Robert Love, who founded Waynesville.  Colonel Love granted land and homesteads to the families for development, which became the Cataloochee Valley settlement.  There were two main areas of the valley: Big Cataloochee and Little Cataloochee.

The lives of the Cataloochee residents were reminiscent of a typical mountain community at that time. Women handled the raising of children, mending clothes, cleaning the home and cooking meals. Men and boys would work out on the farm tending to the livestock, sowing, and harvesting crops. Some residents ran businesses on the side like a blacksmith shop, gristmill or commercial apple growing.  Church gatherings were a key role in this community.  Sunday school was held every week, and Sunday services were held once a month. Most of the preachers were circuit riders who only visited once a month so when a preacher was in the valley, church services were held both Sunday morning and evening. A revival was also held every fall. For the most part, Cataloochee residents were predominantly Baptist or Methodist.

School also played an important part in the valley. There were three schools in the valley where students were taught the subjects of reading, writing, spelling, arithmetic, geography and grammar. At the end of the school week on Friday afternoons, parents would meet at the schoolhouse for a glimpse of what students had done that week. Students would often show off what they had accomplished that week with a spelling bee, recitations or singing.  Cataloochee was no doubt a close, tight-knit community and they very much enjoyed socializing with each other whenever possible.

As the population of Big Cataloochee grew, young people often moved out of the crowded valley to build their own homes and families in Little Cataloochee. By 1910, there were around 1,251 people living in both areas, making it the largest community in the Smoky Mountains.  Before long, the residents of Cataloochee saw tourism as a way to capitalize on the natural offerings of their valley.  They started stocking their streams with rainbow trout for visitors  and charged tourists room and board to stay in their homes. In many ways, it was the start of the strong tourism industry still present in Haywood County today.

In the 1920s, the increase in tourism and the destructive effects of logging gave rise to a movement to create a national park in the Smokies.  For this to happen, the residents of Cataloochee living in the proposed park boundaries either had to sell their land or be forced out. Some were allowed to remain in their homes on lifetime leases, but restrictions on farming and logging forced most people to move out of the valley by the 1940s. Only bits and pieces of the community remain, with the forest reclaiming much of the old farmland and orchard land.   However, a handful of the buildings in the valley have been preserved by the park service and remain to to this day. This includes Beech Grove School, Palmer Chapel and numerous frame houses that help us imagine what life was like in Cataloochee.  The original families that settled in Cataloochee and their descendents sill gather at reunions in the valley to celebrate their unique history and heritage.

A recent documentary has given folks an even closer glimpse into the valley’s history.  “Cataloochee”, which was a project of the Haywood County Historical & Genealogical Society and the Film & Television Production Program at Western Carolina University, tells the history of the land from the time of the Cherokees through the establishment of the national park.  The story of the Cataloochee settlers is told alongside the decades-long effort to get the park here in North Carolina. The documentary is available locally in Haywood County at Blue Ridge Books in Waynesville NC: http://www.blueridgebooksnc.com.

So next time you are visiting the North Carolina Smokies, make sure you take the time to venture into Cataloochee Valley.  This wonderful valley is not just a beautiful location in one of America’s most visited national parks, but an important part of Haywood County’s rich heritage.

6 Tips for a Family-Friendly Trip to Maggie Valley

Spending your hard-earned money and precious time planning a vacation that the entire family will enjoy, both adults and children, can be overwhelming, especially
DETAILS
DETAILS

Dreaming of firefly nights and moonlit memories? Nestled between mountain peaks in the North Carolina Smoky Mountains, the town of Waynesville offers activities and
DETAILS
DETAILS